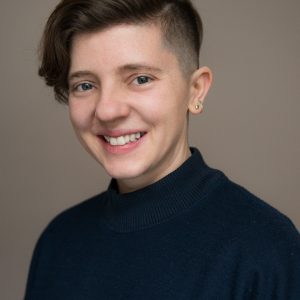 “It was a joy working with Naomi – she can pivot effortlessly between the macro and the micro, always bringing an understanding of psychology to dialect training – vital for building a character. She brings such commitment and passion to what she does – you feel inspired when you’re working with her.”

–Felicity Jones (On the Basis of Sex)

“Naomi’s approach is thorough, vigilant and fastidious without being tedious. The number of nuanced notes given with scalpel-precision were astounding and only ever given in a thoughtful and bolstering way. Naomi was able to be flexible in her approach, tailoring the process on what felt like an individual basis, a mix of phonetics, speech, analysis and a huge sense of play. The creative freedom during the process and attention to performance and character allowed me to create a fully formed character voice in the end. Naomi’s trust and belief in me became quickly reciprocated. Her manner was personable, approachable and her teaching style was collaborative, fun and in short, brilliant.”

Naomi is a London based voice and dialect coach. She has a wide range of coaching experience, including musicals, biopics, fantasy and sci-fi, as well as extended experience in the recording studio for animation and ADR. Some recent film and television credits include Wheel of Time (Amazon), Chernobyl (Johan Renck), On the Basis of Sex (Mimi Leider), How to Build a Girl (Coky Geidroyc), and Mamma Mia: Here We Go Again.

She holds an MFA in Voice Studies from the Royal Central School of Speech and Drama, as well as an M.Ed in second language acquisition and teaching, and a BA in Romance Languages from the University of Oregon. Naomi has a strong foundation in linguistics, teaching English as a Second Language, and loves researching and learning about obscure (or even made up!) accents and languages.